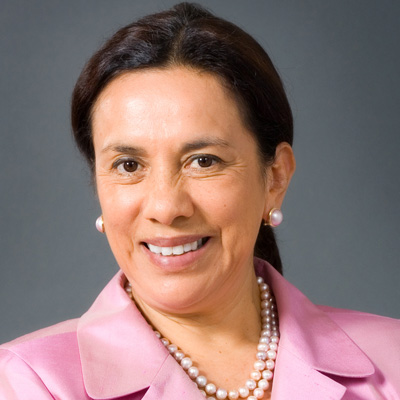 Nationally regarded for her expertise in immigration, civil rights and philanthropy, Antonia Hernández has spent more than four decades advocating for social justice and improving the lives of underserved communities in Los Angeles County and beyond.

Since 2004, she has served as President and Chief Executive Officer of California Community Foundation, one of Southern California’s largest and most active philanthropic organizations, which has served Angelenos for over a century. The Foundation partners with more than 1,600 individual, family and corporate donors and holds assets of more than $1.7 billion. During her tenure, California Community Foundation has granted nearly $2 billion, with a focus on health, housing, education, immigration programs.

Previously, Hernández was president and general counsel of the Mexican American Legal Defense and Educational Fund (MALDEF), a national nonprofit litigation and advocacy organization dedicated to protecting the civil rights of the nation’s Latinos through the legal system, community education and research and policy initiatives.

Hernández began her legal career as a staff attorney with the Los Angeles Center for Law and Justice and worked as counsel to the United States Senate Committee on the Judiciary before joining MALDEF in 1981 as regional counsel in Washington, D.C.

Hernández is a member of the board of directors of the Automobile Club of Southern California, Center on Budget and Policy Priorities, Forest Lawn Memorial-Park Association, Grameen America, and Urban Institute. She currently serves on advisory boards and committees including the Commission on Presidential Debates, Healthy California for All Commission, and UCLA Board of Advisors among others. Hernández is a frequent public speaker and has been awarded several honorary degrees and awards.