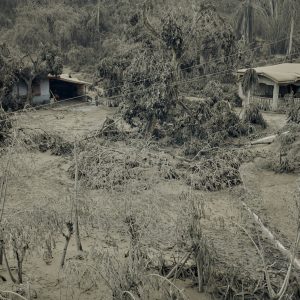 The Taal Volcano—located on an island in the middle of a lake just 40 miles south of the capital, Manila, in Batangas province—has spewed ash, dust and noxious sulfur dioxide fumes, forcing tens of thousands of people to abandon their homes. Mass evacuations continued in the Philippines as resident’s brace for further eruptions . Nearly 44,000 people have fled the 9-mile “danger zone” around the volcano, an area that is home to some half-million people. In their rush to escape the eruption, many people had to abandon livestock and pets and other personal possessions.

The potential threat alarms a country that has suffered from many natural disasters like typhoons, earthquakes, mudslides, tsunamis and floods.  Emergency crews have managed to restore power and electricity to some areas, though a large part of the region still remained in the dark. The Philippines is situated in an area of increased seismic and volcanic activity known as the “Ring of Fire” that forms a rough circle around the Pacific Ocean where several tectonic plates come together. Memories of the 1991 eruption of Mount Pinatubo, which killed hundreds of people and blanketed large swaths of the country in thick ash, have been on officials’ minds since the Taal eruption.

The recovery process will be long and difficult in communities throughout the region. The organizations below provide immediate and long-term relief to affected residents. This list will be updated as more information and resources are available.

When supporting relief organizations, consider marking your gift as general operating support. By doing so, you enable the organization to both respond to current disasters and be prepared for those that may arise in the future. Visit CCF’s disaster giving page for more tips on how to maximize your impact when giving to disaster relief.