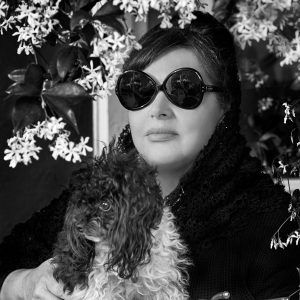 I entered the art world with no training, just a voracious need to express a point of view. My work gamboled twixt performance, video, installation, research and writing, addressing cultural stereotypes and social ethos. Process-oriented and conceptual, it blurs high and low-art. Props built for performances become sculptural objects and visa versa, creating an integral impression at the center of which my body is used as a source of image, narrative, and emotion.

My production tracks a line from the vulnerable to the protected body. In ‘America, the beautiful.’ I offered a distorted vision of female sexuality and the beauty myth: aggressively bound by tape to create an hour-glass figure, make-up caked on, hairspray applied to the point of choking…

In contrast, the large-scale exhibition Soldadera, was a protective and memorializing project for women that fought in the Mexican Revolution (1910-1920). These soldaderas were essential in that long, violent civil war. I considered how each woman and her archive open an understanding of our own histories and futures. In one work there are five Edwardian “fighting costumes,” dresses representing various class statuses, inspired by the Special Collections Library at UC Riverside. Made of Kevlar®, they’re bullet-resistant, providing metaphorical protection. I tested one with weaponry of the time; the apron stopped a 9 mm slug.

Currently I’m working on a fantastical redesign of the speculum, the most significant since 1943! The device used today for pelvic examinations is credited to James Marion Sims. Called the “father of American gynecology,” he earned his success on the backs of enslaved women: conducting experiments in his backyard hospital. Born of racist and misogynistic beginnings, the tool deserves attention from an artist willing to explore its symbolic limits, use and object hood.