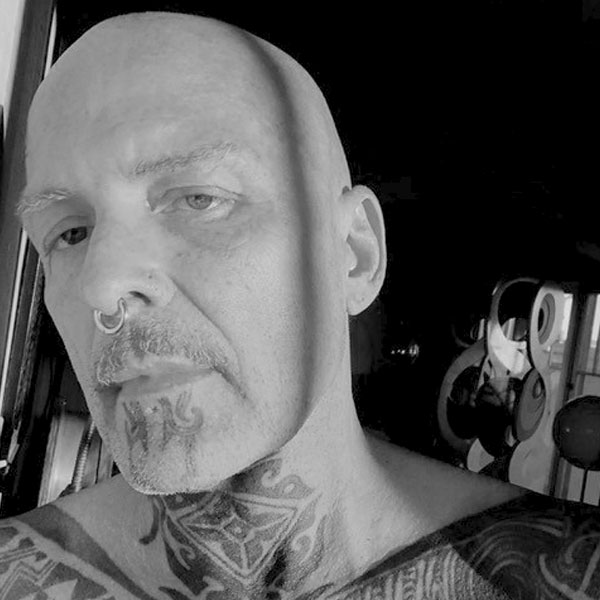 My performance concepts usually come from text: a theory or thesis that insists on being explored as a life. In 2018, Acephalous Monster, solo performance, I started with Georges Bataille texts on Nietzsche’s pivotal Death-of-God and in his descent into madness, Dionysus vs. The Crucified One. And taking it from the 1930’s pre-occupation France to Genesis P-Orridge’s writings in Esoterrorist: “The themes of mythology are not just archaic knowledge — they are living actualities of human beings.” This gave me the inspiration to bring the minotaur into action. As well, I’m working with the Art Historian Amelia Jones on a survey show for 2020. Revisiting my archive, which contains documentation, costumes, and soundtracks of performance work as early as 1981, and see the shifting layers of identity politics, body art, sex acts, archetype and the AIDS pandemic, the polemic of blood, deconstructing memoir and automatism. Interpreting esoteric traditions excite me more than ever.

EDUCATION
Ron Athey identifies as self-taught but has a life of experience in Los Angeles post-punk performance scenes, has collaborated with visual artist and opera directors, participated in a year of philosophy seminars with Dr. Sue Johnny Golding at Greenwich University in 2012, and has visiting artist teaching history at Cal Arts, Roski, and UCLA. The last class, at Roski, was a seminar titled “Undergrounds and Avant Gardes”, a Los Angeles-centric look at UFO cults, the origin of the Pentecostal Church, the first blacksploitation film, AIDS activism, punk rock and the decades of porn industry, looking at how these movements changed the culture of the city.