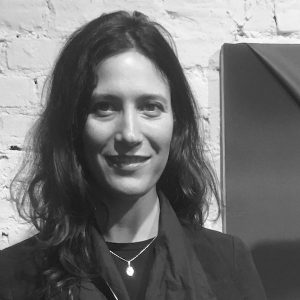 …the sea and the desert, the beautiful earth, the immense sky, and far to the north, the moon, still there from the night before…
Excerpt: Ask the Dust, John Fante

My work is inspired by the city of Los Angeles: its aesthetic and conditional extremes – landscape, light and urban context as well as psychological, emotional and spiritual impact. Desert, dust, sun, ocean and hills seem at times to drive an undercurrent of desire, fear, and violent longing, just beneath a perfected surface of L.A.’s slick and seamless sky gradients.

I express this emotionalism and drama through color, material use, surface quality and imagery. Transformation, whether physical or spiritual, is alluded to by large gradient paintings- ‘illusionistic’ monochrome fades created by a repeated systematic merging of two colors. These vastly spatial monochromes present a contradiction of terms: I invite a viewer into atmospheric illusion while forcing the consideration of a flat surface.

Works that are cut, spliced, split and layered reference the fractured contemporary context of our constructed reality while pointing to the materiality of the canvas and paint. In ‘poured’ works, I apply paint onto raw canvas: accidental and approximate gestures result in paintings of cloudy skies and nighttime realms.

Gleaming metal sculptural elements are concealed and revealed, behaving at times as frame and as accessory while alluding to the glint of sunset light on city buildings in the distance. Elsewhere, I integrate metal as part of the image, as in works such as “Crimson Sky Split”, where a blood-red sky is split open to reveal a metal realm behind. The drama in these works is a poetic allusion to the realities of the city’s contemporary condition: water shortage, fires, gentrification and social extremes. A video work of a rattlesnake encountered in the city at dusk, “Talisman”, describes most literally the complexities and contradictions of the city.