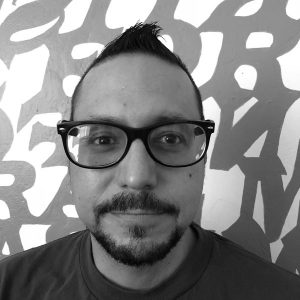 Using mutant practices, including installation, drawing, painting, sculpture, and relational, interactive projects inspired by the history of minimal and conceptual art and social sculpture, my work focuses on re-interpretation of memory, inhabitation, and cultural history inspired by my pluralistic existence growing up on the hinge of the U.S./Mexico border and within the diverse realm of Los Angeles.

My personal concept of the mutant, a condition of unexpected evolution, was born from my adolescent reading of X-Men comics that featured mutant outsiders/anti-heroes whose special abilities set them apart, as well as my own Mexican-American ethnicity.

The term “mutant” not only refers to my mixing of artistic processes, but also to the multi-ethnic existence of those living in the United States and the discomfort some feel when viewing a new type of authenticity that is not “true” to any one culture. This blending, mixing, and nuance creates the “mutant” concept that exists as a force of its own pushing the viewer to absorb, re-process, and re-categorize concepts related to kitsch, stereotypes, and “the ugly” and new breeds of culture.

My installations are designed to be physical experiences for the viewers as they continually move through the space with changing perspectives.

Through the making of these sensorial, layered environments, I seek to provide an opportunity to measure and reassess the defined/undefined world around the viewer, leading toward fresh discoveries. My works are often site-specific, inspired by the communities in which they are created, using locally sourced materials.

2018
The Art of Protest: Epiphany & the Culture of Empowerment, Church of the Epiphany, Los Angeles, CA.