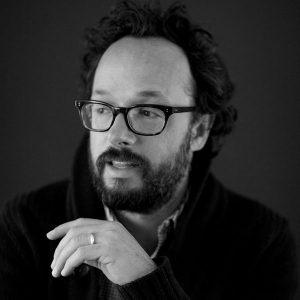 My work addresses the relationship between physical space, architecture and the painted image. Currently, I am employing photographic material as a ground on which to build paintings. The nature photographs act as a location, a point of identification or projection. The physical paint acts as a screen over the photographs compressing the space and bringing two methods of viewing together on the surface as a means to explore new territories of representation and reception in my work. Looking through one element to another and back has become a consistent visual space in the work.

I am interested in the sense of loss the photographs instill as a moment past alongside the immediacy of the abstracted architectural proposal.  It is a relationship between what is actual and what is imagined. The use of nature photographs softened by the act of blowing them up from off-set lithography proposes an already mediated relation to that which is deemed more authentic than the non-objective image. I am interested in the tension, the tenuous moment between these modes and the incongruities they produce.