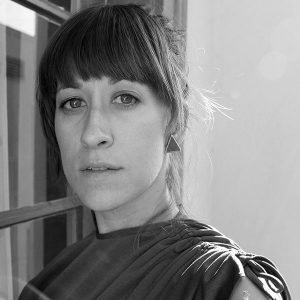 I work across disciplines, examining perceptual and emotional sensitivity between people, objects and environments. My work combines sculpture, sound-baths, drawings, paintings, sports/dance teams and feature films with live music. Installations, films and instances of the performative combine to create a biographical imaginary that shifts bodily comprehension toward a physical and tactile language of perception.

My films move beyond the visual into a more complete sensory experience on the body of the viewer through a combination of subtle and pronounced transformations of narrative filmmaking and the cinematic experience. Characters’ willingness to encounter that which lies beyond their reach becomes a model for the viewer’s own rootless journey into the unknowns of language, relationship and environment. In these films, different languages are spoken and intuited without translation and characters are able to see and touch sound. Objects and images appear and reappear within the films and emerge in modulated forms as sculptures and drawings in the gallery, long after their narrative significance has faded. Details and minutia within the film are left unresolved and unexplained so that the audience must grapple with a consistent lack of information.

I approach 2D and 3D work with the same narrative inconclusiveness, resulting in bodies of work that oscillate between the transcendental and a rootedness in the real world and the body.