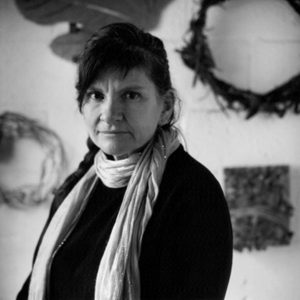 Data gathering, interviews and experimentation with unconventional materials have been predominant methods in my artwork since 1976. My work chronicles historical and contemporary issues housed in sculpture and multi-media installations created with a limitless array of mediums and skills. The simultaneous wrestling of complex ideas and studio experiments emphasizes to me the importance of combining conceptual ideas, a poetic space and material juxtapositions. I am as much an object-maker as a thinker, so I learn much from the materials I use in fabricating the works.

My artistic involvement is closely aligned with interdisciplinary pursuits. The urban environment, feminism, aging, HIV/AIDS, labor and collective memory are some of the specific issues I have engaged through my work. I have created artwork in conjunction with a unique range of collaborators such as the Bureau of Automotive Repair, Santa Monica Bay Restoration Project, California Science Center (CSC), Natural History Museum of Los Angeles County and the Future Generations Ride of the Lakota. In 1987 I invented a method to create images from the smog in the air. The Smog Collector series brought my work to international attention in the art world and mainstream sources such as Newsweek and The Wall Street Journal.

Recently, I completed artwork for CSC’s Ecosystems and am continuing with art about pollution and gender that was exhibited for COP15 in Copenhagen.

2010
Pearls of Wisdom, facilitated by A Window Between Worlds. Project funded by James Irvine Foundation and City of Los Angeles Department of Cultural Affairs, Los Angeles

2009
Artwork commissioned for an exhibition by ARTPORT in collaboration with the Global Gender and Climate Alliance and in conjunction with the United Nations Climate Change Conference, Copenhagen, Denmark