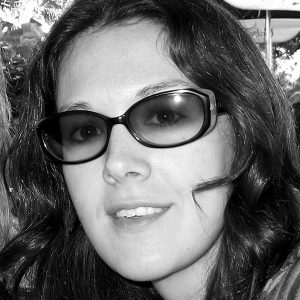 My artistic practice is situated at the intersection of art and cinema. As a visual artist in Los Angeles, I focus the lens of my video camera on Hollywood cinema with structuralist investigations of mise-en-scène, character and narrative to initiate discussions about representations of femininity, place and time.

I am inspired by and engaged with the language of cinema, its history, theory and structure. I am continually attracted to the cinematic residue that seeps into our unconscious and the inner archive of visual memories it forms.

My videos operate within and sometimes against the conventions and clichés of various film genres including the western, melodrama, silent comedy and horror. I am especially interested in the visual vocabulary produced by Hollywood cinema, and my work examines how aspects of this language influence our assumptions about character and story.

My past single and multi-channel video installations have explored gender roles, character construction, simultaneity, image-sound relationships and notions of place through camera movement, editing and the configuration of video projection in a given space. In these works, I amplify mise-en-scène (e.g., exaggerating setting, lighting or costumes) without a traditional storyline. I invite the viewer on a journey of narrative remnants, placing equal importance on what is shown and on what has been left unsaid, to evoke each viewer’s cinematic memory in forming the narrative of the work.

My intention is to ask questions and create a discourse around narrative and the visual and aural cues that have been instilled in us through cinema.

2008
Here Once Again: Where Art and Cinema Interact, The Gallery Loop, Seoul, Korea

2009
Investing in Artists Grant from the Center for Cultural Innovation, Los Angeles