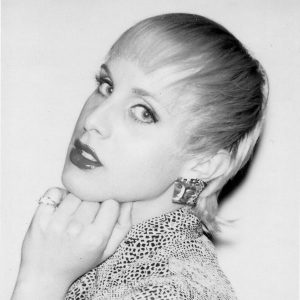 Infusing elements of photography, video, text and performance, my work is rooted in cultivating and investigating under-recognized aspects of transgender history, locating myself in the history, and communicating my contemporary experience of gender and sexuality. Drawing from feminist and queer theoretical discourse, I address sexual exploitation, transgender representation, drag performance and explore relationships that facilitate queer/countercultural lineage.

With self-awareness and agency, my work reinvents and redistributes relationships of spectacle-spectator, domesticated-exoticized, dominator-subjugated. My performances incriminate the viewer, aiming to challenge conventions of entertainment and drag performance, as well as existing art historical representations of queer people.

I engage and reactivate historical queer vernacular, a coded language of resistance that is often times illegible and cryptic to an unfamiliarized audience. Locating myself both behind and in front of the lens, I inhabit the palatable, and often vacated aesthetic sensibility of drag, replacing the formulaic lip-synching routine with subversive language; I seek to destabilize both the drag-puppet and the voyeur, in an effort to humanize these reductive representations and simultaneously challenge their modes of misinterpretation.

My work provides a place to construct myself. I revisit erased histories, perform and inhabit multiple roles and narratives, and document moments of, and in between, gender scripting a narrative that is inherently self-reflexive as it is constructed, deconstructed and experienced.