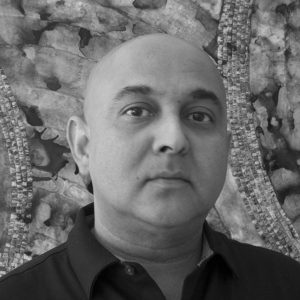 My work strives to articulate those instances in which explicit distinctions known to us through science, art and culture blur and fade into one another. For the past several years, I have made abstract paintings and installations that underscore the viewer’s physical presence and activate the entire architectural space in which the artwork and viewer exist. The structural use of line, either horizontal as in horizons, undulating as in mountains and valleys, spiraling and circling as in expansion and contraction or perspectival as in approaching and receding has been integral in my ongoing investigation of dimensional reality and the subjective experience of limitless space. Comprehending infinity, a desire that can be articulated but never obtained has been a driving force for the recent work. The line used in pictorial space is a finite edge where different spaces meet, but in fact encompasses infinity. Does this paradoxical edge represent an attempt to grasp at unity and difference simultaneously? The vanishing point of perspective that appears fixed is always approaching the point, but never arrives. What does this infinite delay imply for the limits of human knowledge and experience? The complementary nature of light, simultaneously a particle and a wave, serves as a useful model for me to explore the edge between subjective experience and objective information. When one can predict the position of the particle, it is impossible to determine the wavelength of the wave and vice versa. To me this conundrum points to the struggle of extrapolating meaning from evidence and experience. As a strategy to straddle this dilemma, my work emphasizes materiality and exactitude, but also remains perceptually mutable and incorporeal. The fusion of this paradox aspires to become a conduit to another dimension of experience where the possibilities are many and ultimately open ended for the viewers to inscribe for themselves.

2000
Philosophy in the Bedroom, OR Gallery, Vancouver, Canada