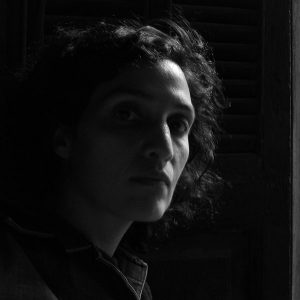 Here in Los Angeles, I imagine a parallel art practice inside Baghdad; a practice where gender is bent, where performance is found in every gestural instant, where the city is a backdrop for routine survival, where the act of looking is a conceptual imperative and photography its mode of inventory. Smoke from a bomb in Baghdad burns my eyes; in Los Angeles I exhale its thick plumes through my nostrils.

My work is based around images — found, altered and those I’ve shot myself. Found images perform for a narrative I’ve constructed, or a narrative unfolds by the command of an image. Bodies perform as images or in tandem with them, and physical objects are documented in order to register the residue of psychological displacement. Text enters the equation in the form of a title, caption, narrative or a proposal for an action.

Recently, during a residency in a rural part of Jordan, I scavenged hundreds of abandoned shoes from alongside roads, in fields and around trash heaps. Since Jordan contains one of the highest populations of displaced Iraqis, it is not difficult to imagine that some shoes originally belonged on the feet of those who fled the war. I am interested in these kinds of crossings; metaphors desperately traversing an endless index of borders.