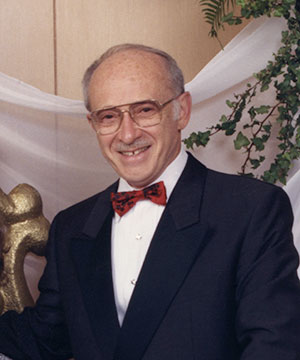 Irving Rappaport passed away peacefully at home, at the age of 90, on Saturday, January 10, 2015, surrounded by his family. His life until that time was anything but passive. It was a life filled with activity and accomplishments.

Irving grew up on the rough streets of the West Side of Chicago, as on of the four sons of Russian and Polish Jewish immigrant parents. he began his quest for higher education at Crane Technical High School in Chicago, then studied at the University of Louisville School of Dentistry for his D.M.D. in 1947, and received his M.D. from the University of Illinois in 1953. After completing post-graduate in oral and plastic surgery, he and his wife, Julia, settled in California where he worked in an academic setting as well as a private practice. He became known and respected as a surgeon in the field of head and neck surgery, and possibly his most notable achievement was establishing the Center for Disorders of the Head and Neck at the University of California, Irvine.

Irv was a patriot and served his country as an officer in the United States Navy.  After his honorable service and discharge, he was later called back to service as the Medical Affairs Officer for Operation HARDTACK, the United States Navy’s High Altitude Nuclear Bomb Test program in 1958. He continued in the U.S. Naval Reserve, where he became Consultant to the Commanding Officer of the U.S Naval Hospital at Camp Pendleton, CA from 1964-1970.

Irv and Julia were married in 1952 at the SAE Chapel on the campus of Northwestern University. Their eldest son, James, was born in Chicago in 1954. After moving to California, they had four other children: Valerie, Janet, Richard, and finally, Steven born in 1964.

Always an active traveler from his early years, Irving visited countries on every continent accompanied by Julia. They shared their stories and pictures with friends, family, and their community. Irv was an aficionado of camera equipment and photography.  He also shared his wife’s interest in horticulture, eventually hosting the University of California, Riverside Avocado Breeding Project on their property; and having an avocado named after them, “the Regal R”. Irv had a passion for ethnic foods and beverages, which he shared with his family at evening meals and Sunday brunches.

In addition to his professional contributions, Irv was dedicated to community service and was named Honored Citizen of Orange County in 1968. He served on the Board of Directors for the Opera Pacific, the International Visitors and Protocol Foundation, and was a charter member of the Center Club.

Irving is survived by his wife of more than 62 years, Julia, as well as his five children and their spouses: James (Marilyn), Valerie (Thomas Byrd), Richard (Wendy), Janet, and Steven.  His survivors also include his grandchildren: Julia, Thomas, and Daniel Byrd; Drew and Brett Rappaport; Kailey, Amanda, and Noelle Rappaport, and Nolan Kretschmer.

The funeral service will commence Monday, January 19, 2015, at 9:30 A.M., and will be immediately followed by the burial with military honors, at the Waverly Chapel of the Fairhaven Memorial Park and Mortuary, 1702 Fairhaven Avenue, Santa Ana, California 92705.

To make a secure, tax-deductible donation online, click on the button below. You may also send checks payable to the California Community Foundation, noting that the donation is for the Dr. Irving Rappaport Memorial Fund. Checks should be mailed to: