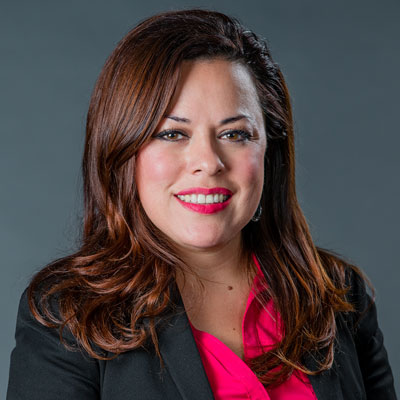 Rosie Arroyo oversees the foundation’s Immigrant Integration portfolio with the goal of empowering immigrants to thrive civically, economically and socially. This includes overseeing the Los Angeles Justice Fund (LAJF), a $10M public-private partnership between the City of Los Angeles, the County of Los Angeles, the Weingart Foundation, and CCF.

Widely considered a coalition builder, a change agent, and effective communicator, Arroyo began her career by working at LAUSD under the School Readiness Language Development Program (SRLDP). She then went on to work for the National Association of Latino Elected and Appointed Officials (NALEO) Educational Fund where she helped lead a national citizenship campaign titled Ya es hora ¡Ciudadanía! included more than 400 organizations nationwide to inform, educate, and motivate over 1 million legal permanent residents to apply for U.S. citizenship.

Arroyo is Board Chair of Hispanas Organized for Political Equality (HOPE), a nonprofit organization that builds the Latina leadership pipeline and champions policies that advance Latinas in California and nationally. In 2019, Arroyo was selected to the California Influencer Series, an effort launched by the Sacramento Bee and CA newspapers to encourage conversations between the public and leaders/influencers about the state’s most pressing public policy challenges impacting Californian’s. Arroyo is a member of the American Bar Foundation’s Network for Justice Advisory Committee, the USC Program for Environmental and Regional Equity Advisory Committee and is a fellow of the 2018 Latina Global Executive Leadership Program.

Arroyo is a graduate from the California State University of Los Angeles. She is the proud daughter of immigrant parents, has 9 siblings and is a mother to a young activist.