Expand the opportunities and protect the rights of our immigrant community members.

Antonio’s first thought when he was told he would be granted relief was “now I get to be reunited with my family.” A glimmer of hope that came after he spent 83 grueling days in Adelanto Detention Center; 83 days that felt like a lifetime away from his four adult children and grandchildren, the home he established with his wife of 40 years in South L.A. and the community he has contributed to for over four decades since he immigrated here in 1977. “It was a desperate situation,” Antonio continued, describing the three months he spent in detention.

In deportation proceedings, those who appear with a lawyer are five times more likely to be released from detention but more than two-thirds of individuals who face a judge in an L.A. area immigration court do so alone, without legal representation. “It’s crucial to have an attorney in immigration court,” explained Benjamin Harville, an immigrant rights attorney with Public Counsel.

Through a referral program that is operated by local nonprofits out of the Adelanto center, Antonio heard about the L.A. Justice Fund— a cross-sector collaboration that is working to address the growing demand among our diverse immigrant communities for access to legal representation. Soon after, Benjamin was able to take on Antonio’s case with support from the Fund.

“The Justice Fund is important both in the specific aspect of defending immigrants, but also in setting an example throughout the nation of what cities should be doing and how cities can respond.”

Unlike criminal proceedings, those who appear in deportation proceedings do not have the right to an attorney. “So for someone like Antonio, the government is not going to provide him one, which means that if you’re not in a position to hire an attorney, you have to go into immigration court yourself and do the best you can to try to advocate on your own behalf,” Benjamin said noting the language barrier and complexities of immigration law.

On June 13th, 2019, Antonio was officially granted relief and reunited with his family. But his story is a bright thread in a troubling pattern of non-citizen residents being plucked from their homes, ripped away from their families and torn out of their communities at alarming rates. As a response, in 2017, California Community Foundation joined with Los Angeles County, City of Los Angeles and Weingart Foundation to establish the L.A. Justice Fund. 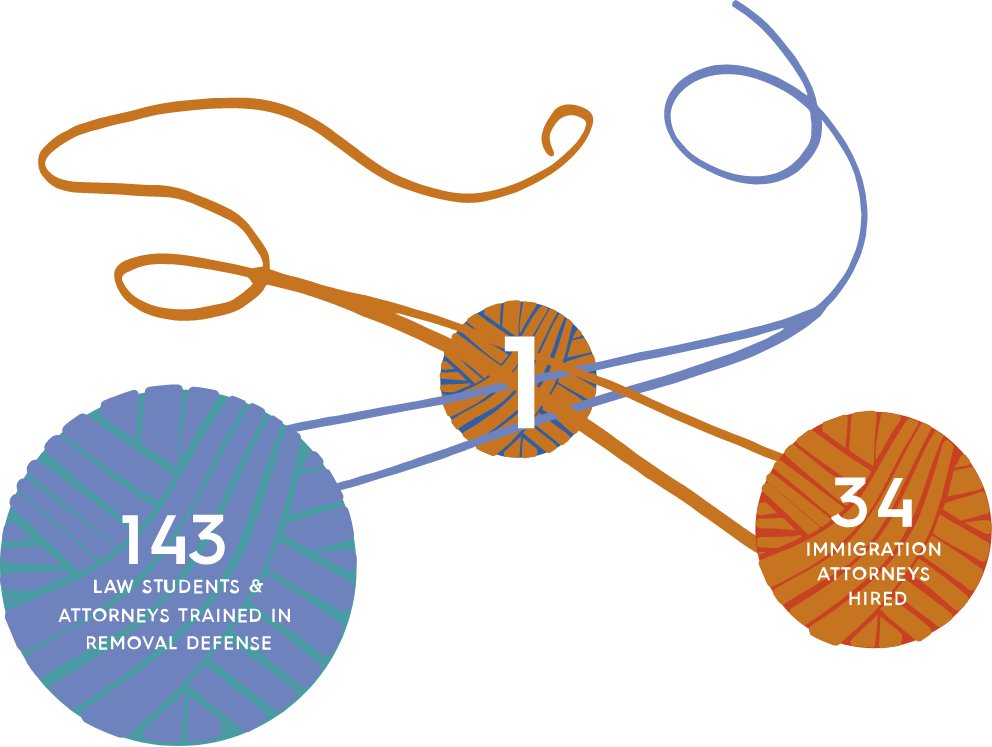 “Immigrants are under attack. We’ve lost our moral compass. The Justice Fund is important both in the specific aspect of defending immigrants, but also in setting an example throughout the nation of what cities should be doing and how cities can respond, “ said L.A. City Councilmember Gil Cedillo when describing the opportunity Los Angeles leaders seized to serve as a model for public-private partnerships that support and protect immigrant communities.

Since then, the partners have granted out $7.4 million to 17 legal aid organizations, quilting together a blanket of immigration legal service providers across Los Angeles who have opened up access to representation for more than 300 long-time L.A. residents. Through trainings and partnerships with local law schools, the L.A. Justice Fund is also working to build a more inclusive future by preparing the next generation of removal defense attorneys to protect Angelenos like Antonio.

“I was in uncertainty, I had never been in such a problem. With hope and the help of Public Counsel, I now have my freedom,” Antonio said.